I am not happy that there is an unwelcome squatter in my boob.

I suppose, if it could argue, it would throw back a snappy retort like “I ain’t no stranger, honey.  I just multiply faster than the rest of these pathetic shits floating around here.”

Okay, point taken.  But unless you are a lymphocyte and I have bacterial pneumonia, I’m not recruiting any over achievers.

I found out I had cancer on Thursday, July 19, 2012.  The day before I had gone to my GYN to investigate why my right boob looked a little odd.   Over the last six months or so it seemed as if I was losing fat in my boob.  I was hoping my ass would follow suit, but alas, only the boob.  I felt something, but without fat in the boob, I mused, it was connective tissue or something.  You know, something normal.

Apparently not.  Within an hour I was getting a mammogram and a breast ultrasound and had an appointment with a breast specialist the next day.  Four hours after that I had a miserable looking radiologist come in to tell me that I needed the right breast biopsied.  Oh, and by the way, I saw a spot in your left boob too.

Nothing makes you feel more vulnerable than wearing a too small cotton gown opened to the front and blue gel on your tits.

The following day I met with the breast specialist.  Of course before I even met him I determined that he was one of the top ten breast surgeons in the city, was internationally renown, and had no malpractice suits on his record.  And in the midst of my daze–for I was dazed from the moment I left my gynecologist’s office the day before–I told him that I was having trouble processing it all.  He told me that I needed to know “that everyone [in his practice] is totally vested in what you are going through.”  I needed to believe that and I felt a bit better.

He did another ultrasound.  Took a fine needle aspiration of a lymph node, and then a core biopsy of the offending right boob area.  The whole time I chatted away wanting to know what I was seeing on the ultrasound screen.  I got dressed and met him in his office.

Fuck me.  That was one wild 24 hours.  He knew from 35 years of practice what it was on first look, but only the pathology report would reveal what kind of cancer was there and give us the information that we needed to go forward. I went back to the office and I had a hard time concentrating, though I did try, and managed, to get some work done.  But I was still in a daze.  I didn’t have enough information to wrap my head around this news.  I didn’t know enough. I was so exhausted when I finally got home, I didn’t even have the energy to research the stereotactic biopsy scheduled for  the following morning.

Life had turned surreal.  Clocks were melting, landscapes were harsh, and I had breast cancer. 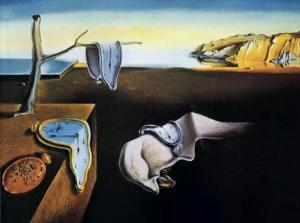