When I was a little girl I had Barbies–in the 1960s, who didn’t?  I played with them all the time, but what I loved most was the case.  It was a 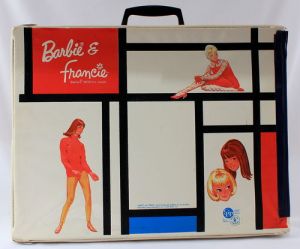 big Barbie/Francie case that had plenty of room for both dolls and their clothes inside.  It was the Bergdorf-Goodman of Barbie cases.  But often I would dump my Barbies out of it, lay sheets of papers in it, and then I would walk up and down the street playing “business woman.”  It was one of my favorite things to do.  Someday I was going to be like That Girl, Marlo Thomas, live in the city, have my apartment, and go to and from the office with my Barbie case.

Flash forward 40 years and that’s exactly what I do.  Sometimes, dressed in my suit and carrying my brief as I go about my work, I feel like I am walking hand-in-hand with that little girl living the dream.  Much of my self-identification is tied inextricably with my career.  In those moments where I hate my job–and we all have them–I get down on myself.  And in those moments that I love my job–which is more often than not–I love me.  It’s all tied to performance and productivity.

My performance and productivity took a nose dive when the Death Star set up its boob orbit.  First it was the seemingly endless doctor’s visits–one right after the other.  After that it was managing the doctors and myself.  I had become my project to manage and it is the hardest thing I’ve ever done.  It’s a lot easier when you’re shuffling paper and not shuffling your life.  Then the medications started.  In the beginning, TFK made me fatigued and I found myself either coming in later or leaving earlier.  It waxes and wanes now, largely not an issue, but then other things took hold.

Convinced I could do it all, I pushed through the days and committed myself to teaching as well.  Teaching is the buzz of buzzes.  The joy I experience in teaching and mentoring the next generation of my profession tickles me to no end.  I could be dragging and hanging on to the last of my cells on a given day, but as soon as I walk into the classroom I get energized.  To say I love it is truly an understatement.  And the glorious feedback that I get from my students makes me even want to work harder.  But that decision was made when I was deluded by pink mania and thought I’d take TFK, get a lumpectomy, endure chemo and maybe radiation, and then I’d be good to go.  In a year or so it would be all behind me.

Well, we all know that now I live a Stage IV reality and that has changed the landscape.  Though it doesn’t make up my every thought, sometimes I wonder if I’ll be one of those individuals who succumbs within two years or if I’ll be fortunate enough to see 65.  I am tired and the pain in my lower back has affected my ability to be as energetic and proactive as I was.  I try to avoid walking across campus or meeting people in town during the week.  I come home and I’m dead to the world.  And on nights where I must attend events and functions or teach it is difficult to keep up the stamina, let alone wake up bright-eyed and bushy-tailed the next day.  About all I can muster is a half day on the good days.

I can deal with the reality of cancer.  But the concerns about mortality are dwarfed by the fear of losing my reputation as a producer, an innovator, and a colleague on whom one can depend.  Much more slips through the cracks now.  The demands don’t stop coming just because I’ve got own private Idaho going on here.   The slice of the pie over which I have stewardship must continue to move forward, even though I feel that largely I am now static.

It’s a real concern and I’m not sure how to go forward.  As one of my friends told me very recently, maybe I just have to come to terms that I am not superwoman and that I can’t do it all.

I find it almost impossible to accept that reality–that I can’t do it all.  Yet I can accept that I have cancer.

Go figure.  I’m not so sure I know who I am sometimes.

16 Responses to Acceptance and Fear