The Bridge is Pink

Since I told my colleague about my breast cancer the other day, it has been all I could do not to think about her.  I felt badly.  Here she was probably expecting me to say that I sprained an ankle and instead I basically said, “I’m going to die. Have a nice day.”

So I went to see her today to apologize for laying that on her.  She would have none of it, of course, and during the course of our conversation mentioned that the George Washington Bridge was pink for October.  Since moving to Manhattan eight years ago I no longer have a car so I don’t cross it often and am not in clear viewing of this ginormous bridge, so I was unaware. 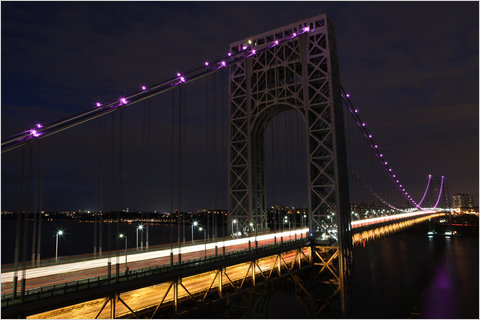 I wrinkled my face a bit and thought back to why I like pink: it makes you look younger.  If it weren’t for that I wouldn’t mind if pink just disappeared.  However, while I wrinkled my face it wasn’t accompanied by the usual pink vitriol.  I mean, I said I would be happy if I never saw pink again, but that was about it.

I’m having a hard time walking.  My back and hip hurt a lot and I’m in a lot of pain right now.  And when I went to the oncologist’s office this afternoon, I picked up a small pink ribbon pin that was in a basket with pink nail files and pink pens (they just do this for October).  I can’t tell you why I picked it up.  I kind of wonder myself.

I sat in the waiting room and held back the tears because it hurt a lot and I was pissed that I even had to go through this.  And I looked around at the other women in the room and was pissed for them too.  I didn’t want these women to see me walking with a cane because I didn’t want to scare them.  I’m scared and hurting and pissed and now I have a pink ribbon pin.  But why?

In some odd way it’s kind of like a personal medal.  It’s something I’ll stow away with my old nursing pin, the honor society pin, the tap dancing charms, and the fellowship pin.  Just something between me and the universe.  It’s kind of like a milestone in an odd kind of way.

A tiny little ribbon of hope on a day when I needed it most.  Guess that’s not so bad to keep among one’s tangible reminders of success amid challenge.

15 Responses to The Bridge is Pink