So I’m five months into this cancer crap.  And, to quote a popular refrain, “what a long strange trip it’s been.”

I take it a day at a time, but the days have been pretty long since October.   The last feeling of real progress and overall optimism was in September when I met Dr. Raptis.  I was moving forward in an environment of respect and trust and that was enough for me.   As I look back on the past few months, once the back pain took over in earnest in October it was quite a challenge to look ahead to better days.  This is a downside of being very present-oriented: when we go though all of this crap it’s hard to look forward and be hopeful without sounding like a perky cliché.   And feeling as I have lately, any time I read one of those perky comments I reached behind me, took out my virtual shovel, and virtually smacked that person right in the puss.  (#onereasonwhytwitterfollowersgoaway)

Pain plays weird tricks on you.  It gradually erodes your ability to keep your confidence and even trust yourself.    “Hurt!  HURT!  I hurt now!” trades places with “I don’t feel anything now. Was it really there?  It must be in my head.”   It’s like the drunk relative that shows up and fucks up your party.   It saps your energy, makes you feel all around disgusted, and makes you question good outcomes.  Sure, I knew I had metastatic breast cancer, but add extraordinary pain and the sheer weight of that diagnosis and prognosis became, in some moments, too heavy to carry around.  It was, in every sense of the word, a true burden.  The worst time of the day was bedtime.  I’d lay my head on the pillow, the cats would position themselves around (and on) me, and then I would cry.  It would just come.  I never thought this would be a picnic, but to be so debilitated so soon?   Balls!  I can’t go down like this.

As karma would have it, I woke up on Sunday and a newly-made friend, Christie, sent me a Facebook message about pain.  Out of the blue.  It was as if she was privy to my internal conversation and my growing sense of despair.  “When pain crosses the line from warning to torture,” she wrote,  “we have a significant problem.  And there needs to be an actual plan in place to deal with it as such.”

She nailed it: torture.  Christie went on to suggest that I ask for a consult with a pain management service.  “The shit you are living with, it was designed for heavy duty narcs. And you earn them every time you get up, keep moving, and tell cancer to fuck off.”   She was right!  Why was I settling?  I don’t settle for anything and yet I’m going to settle for pain?  I fired off an email to the physician’s assistant and asked for her guidance; I was between oncologists and didn’t know who to ask for help.  I didn’t doubt that I would get help and it came quickly.

Yesterday I had an appointment with an exceptional physician at Mount Sinai to talk pain.  I didn’t know what to expect, but I knew I felt defeated and somewhat hopeless.  I filled out the paperwork, indicated on the diagram where the pain was, and even drew a graph to illustrate how it fluctuated from October to the present.   Through our conversation I got a better sense of the context of the pain and the many options available to treat it.  Just learning that this was something that could be managed with a variety of tools was a relief.

For one thing, I learned that the lytic lesions, which had grown and since improved, may have kick-started this whole process, but the pain wasn’t coming solely from that damaged bone.  He hypothesized that it was coming from the vertebral facets which now had taken over to support the weight that the damaged bone could no longer do.  They are likely arthritic and with their new stress are causing muscle spasms, general pain, and irritating the nerves.  Just understanding the physiology was mood altering for me.  And now that we had a better handle on the physiology a plan could be developed to deal. 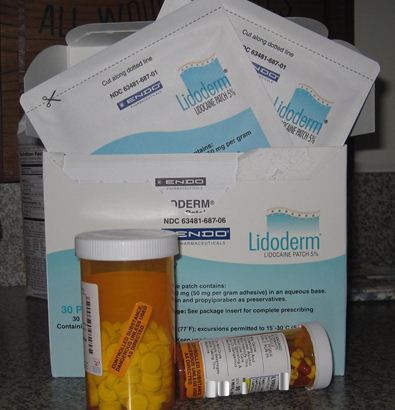 The plan involves, first, an MRI of the lumbar spine to see how this hypothesis stacks up against a more accurate and detailed image of the physiology.  In the meantime, I am using lidocaine patches on the lumbar area of my spine, taking Lyrica on a schedule to get ahead of the neuropathic pain, and Oxycodone for any breakthrough pain.  If the MRI supports the hypothesis, then I will  have a nerve block injection.  There are other options should any one component not be successful.

I may have gone into that office dejected and disgusted, but I left it uplifted and hopeful.  For the first time in two months I actually feel like my future is not wholly dictated by neurons firing pain signals.  I am hopeful that I’ll be able to move ahead with my life, with my career, and with this conserved energy push back against the disease.  ‘Cause, fuck you, cancer.  I’ve got my life to live.