Okay, just one more commentary on this ad campaign and I will move on.

When I found out that I had breast cancer, the world-class surgeon to whom I was referred downplayed its seriousness.  When I look back, it has to be one of the single oddest moment of the surreal life I began to lead in July 2012.  He told me that if I were to have cancer, then breast cancer was the one to have.

I didn’t know any better at the time.  I repeated it to my family and friends.  I’ll be okay.  This is the easy cancer.  Repeating it even made me feel better.  And then quite suddenly it wasn’t easy anymore.

I was diagnosed with metastatic breast cancer about three weeks into my initial diagnosis of invasive ductal carcinoma.  As I broadened my knowledge base and connected with organizations and individuals, I learned that breast cancer was never the easy cancer.  I could have any combination of surgery and medication and still face metastatic breast cancer at some point in the future.  Or not.  What an awful thing this really was.  My surgeon was talking out of his ass.  He had assumed a paternal role and was just patronizing me.  One of the reasons I walked away from that practice.

Truth is, metastatic cancer is just as hard as any other kind of breast cancer, it’s just that its stakes are higher.  Medications work and I don’t know for how long.  Then one of them stops working and I go on another.  It’s working, but making living impossible.  So I try another and hope that it works.  I go from scan to scan hoping the latest ache doesn’t show up as a hot spot.  And now I always walk with a cane.  There isn’t a choice.  Sometimes I think I don’t need it and, for awhile, I don’t.  And then things get so that I do. And sometimes I pretend I don’t really need the narcotics I take on schedule, but I always do.  I’ve stopped trying on both accounts.

And one thing we all face–regardless of the cancer any one of us might have–are the goodbyes.  All of the goodbyes.  The friends that we make and grow to love suddenly become quiet.  Blogs aren’t updated.  Twitter feeds go silent.  Good wishes litter static Facebook pages like a carpet of leaves. 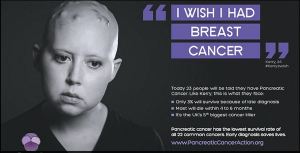 Like many of you, I was Twitter buddies with Jada.  When I saw that she was entering hospice we sent private messages back and forth.  Nothing more could be done and she told me that she had made peace with that.  She always asked me how I was doing, wished that I was pain free, and wanted me to have a good life.  I would tell her that she was loved and how much I appreciated her.  I had a rough couple of days and hadn’t checked Twitter, but as soon as I was able I sent her a message on January 29.  I told her she was loved and that the weather in NYC was colder than it had been for years.  And then I read on AnneMarie’s blog that she was gone.  I had missed her last tweet on January 27: “Y se me va la vida….and my life goes away….“.   She died on January 28.  Thirty four years old.

It was on the heels of this young woman’s senseless death from metastatic breast cancer that Pancreatic Cancer Action UK launched its advertising campaign.  “Hard hitting” they called it, as if to lend credibility to the central message that having breast or testicular cancer was somehow “better” than pancreatic cancer.  The organization’s founder staunchly defends the campaign because when she was diagnosed she wished she could have had breast cancer.  The good cancer.  The one with all of the wonderful outcomes. The one with all of the money.  The one that the public loves and will walk miles for.  The one that is pink. The one that is pretty.

The one that kills.  Every 74 seconds someone in the world dies from metastatic breast cancer.  In starker terms? One thousand one hundred sixty seven individuals every day die of breast cancer.

Five days after PC Action’s “hard hitting” campaign shit across the television sets and public spaces of the UK and the internet, we know no more today than we did before about pancreatic cancer.   And the entire episode has left me feeling hollow inside.  All I know is that it was a lousy move; what a short-sighted and self-indulgent campaign this was.  It has added nothing to the basic knowledge set about pancreatic cancer’s signs and symptoms, just a pool of very unfortunate individuals wishing they had good cancers.

I can’t make sense of any of it.  Our friends die every day and we have to put up with this?

40 Responses to One More Thing!