I have another lytic lesion in my sacrum.  When I saw the picture from my routine PET/CT it looked like the Eye of Mordor.  The circle of the body was bright orange and there on the left, on the sacrum, bright white.  Okay, maybe it looked like the Crossed Eye of Mordor–which would say a lot about my twisted evil cancer adventure.

Only two weeks ago I was strutting around like a happy peacock telling people that I had not felt this good since before I was diagnosed.  And it was true!  Oh sure, I still used the cane because my back would get tired and I needed support, but I felt great!  My radiation oncologist told me that having so much fatigue in excess of six to eight weeks of treatment could not be attributed to radiation–not that long.  Then I recalled that I stopped taking Letrozole in mid-December, a month later I began to feel improvement in my hands and joints and, it seems, energy.  The drug was brutal and I am so glad that it is no longer part of my drug arsenal.  In comparison, Exemestane seems to be much gentler on my body.

Now it’s back to two hours of MRI imaging, little ink dots (one can hardly call them tattoos), and that bloody Varian.  Well, at least I know what to expect.  But this is all short term stuff and the news was not all bad: my primary breast tumor has less uptake of the tracer, everything is either better or stable–except for my lesion.  And since everything else is responding so well, it may be that my little lesion is an outlier–a tumor that does not respond to my current treatment because its characteristics are different.  Little bastard. 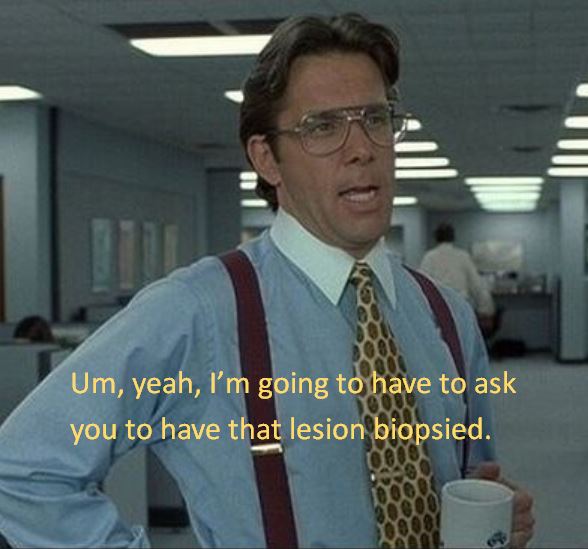 Clearly no one informed me that when you have cancer you NEVER walk around like a peacock and tell people you feel better than you have in years.  Apparently cancer is hypersensitive to the jinx.

But, then again, no one ever talks about metastatic breast cancer in the way that they talk about everything else.  And by “they” I’m talking Komen.  It seems that unless it’s a mammogram, BRCA 1/2 previvors, survivors, and walks for the cure, Komen has no interest.

The Kohl’s/Komen #talkpink campaign was a real exercise in hubris.  First, they co-opted METAvivor’s 2012 Elephant in the Pink Room campaign. METAvivor is an organization that raises money for metastatic research–the very thing that Komen so consistently ignores. But, second, as they pursued their #talkpink awareness they did it on the backs of the 30%–the men and women with metastatic disease.

They did it on my back.

Were it not for metastatic disease, the narrative I told about my lesion would not need to be told.  Heck, I wouldn’t even have a blog. Early detection and pink awareness aren’t going to cure me.  I go to the Komen web page and I see a call for nomination for a 2014 “bat girl,” a link to ShopKomen, another link to Make Every Day Pink (TM)–yes, that phrase is trademarked.  On Komen’s advocacy page there is not one reference to metastatic disease. Not one.  There is a link to help you find a Race for the Cure ®.  But why go on?  There is nothing here that speaks to my disease in a way that shows that Komen is pro-actively lobbying on my behalf in any way.   Indeed, to find information on any woman with metastatic disease one must click on the drop down menu, choose “Metastatic Breast Cancer,” and there–buried at the very bottom of the page–is a list of four or five women they have chosen to represent metastatic disease.

All this is to say that I have decided to OCCUPY @SusanGKomen and #Komen.  I am not lobbing any ad-hominem attacks, but I am going to use it to shame them.  And I will use this to educate others.  If Komen thinks they can walk on my back after co-opting the property of an organization whose only purpose is to try to help me, I won’t be silent.

It never bothers me that when I take a stand against injustice that I may be one of millions; one candle in the darkness.  Over time more candles come and the landscape gets brighter. My purpose is not to “take down” Komen–that would be ridiculous.  I want to inform. I want to educate.  And I want to tell Komen that they just can’t walk over my back without being called out and held accountable.  And I will do it until I no longer can.  I’m in it for the long haul.  It is Komen’s turn to be jinxed.

My cause is small.  It is humble.  But “you must be the change you want to see in the world.” Mahatma Ghandi knew something about taking a stand against injustice.

Please, take a candle. I hope you will stand with me.