So I’ve been attempting to write post after post after post, inevitably trashing them all. I tried one on depression, one on anxiety, one on pink. Whatever I tried it just never worked. And I have to say that through it all I learned one thing: I’m sick of this shit.

I thought it was writer’s block, but it wasn’t. I realized that I was sick of writing about my breast cancer. The crises–at least the two I experienced thus far–are over. I’ve bitched and praised doctors. I’m certainly not surprised anymore. I’m smack in the middle of chronic maintenance. And how boring is that.

It’s cancer. I like boring. But what can I say that I haven’t said a hundred times? My latest scans are stable, except that my primary tumor is growing again. But a post about my primary tumor is boring because I don’t know why that–and nothing else–is growing. I’m not experiencing any awful side effects of my medications. In fact, I’ve cut back and take Oxycontin only once a day, and I’d like to bring down the dose of the Lyrica. Exemestane and me are still buddies for the time being. See? All good, but boring.

Then October. I don’t give a shit. Well, until a woman with hair was told not to attend a segment of the TODAY show because she had hair. That got my pantyhose in a bunch and the producers at TODAY were schooled with some serious social media organization. Now that’s been resolved. MBC seems to be making the rounds of the talk shows, and I think I’ve played one of many parts in changing that conversation. (Mind you, I say “one of many,” because so many were digging that path long before I came in with my shovel.)

Last week, after a miserable two weeks with some malicious and tenacious virus that had me on my ass, I developed crippling anxiety. I didn’t want to leave my apartment–and I didn’t. I cried, I felt helpless and alone, and I didn’t move. I was afraid of something. I didn’t want to bug my friends and whine. Then I asked one of my friends if she would pick up some milk and yogurt for me. When she arrived she read me the riot act. “Get the hell out of this apartment and get back to work!” She even bought me a small milk and one yogurt so it wouldn’t last and I’d have to go out.

I was grateful. She was right. How did I go from strong woman to whiney bitch? I was terrified to leave my apartment. “Stop reading those damned cancer blogs and get the hell out of here!”

I spoke to two other friends over the weekend and then the fog started to clear: I was caught in a cancer loop. When some Komen shill on Beyond the Pink Moon (Facebook) started to talk about “cure rates” in defense of Komen’s efforts, I knew I had to get out of this loop. For the cancer loop was becoming more toxic than the cancer itself. “Cure rates?” Fuck you! (Sure, bring on the hate mail. It’s still fuck you.)

I pulled out of every cancer group on Facebook. I even pulled out of the Knitting group; those moderators were nuttier than fruitcakes. Who needed to join a group with a bunch of shrews who deleted your post because you were “off topic” (whatever the fuck that meant). A bunch of dummies drunk on the nectar of being Facebook group moderators. All of this instantly stopped the noise. There is reason in silence; there is no reason in noise. 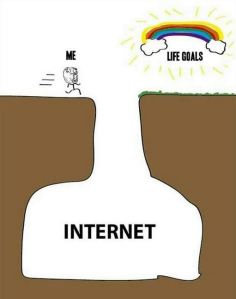 Noise like people who post to a FB group afraid that their port has shifted because of a bulge in their neck and then ask, “What do you think I should do?” What the fuck do we know? Go to the fucking emergency room! What the fuck? Or the “surround yourself with positive people and your positive thoughts will make you happy and then, in turn, make you well” people. Seriously? Go fuck yourself and the horse you rode in on. And all the goddamned ribbons and pink and bitching and moaning and whining (of which I was one). And all the noise about cannabis curing cancer. Let me tell you something, if that were true I should have never even developed cancer, if you get my meaning.

There is a time and place when we seek answers, camaraderie, and solace. But even in Cancertown there is a time where we stick a Poise pad on our panties, pull ’em way up, and move along. The cancer loop sparked and then fed my anxiety. I tried to find answers among the many posts that I scrolled through daily. Instead, I was finding nothing but a bunch of other people looking for answers where there were none. No one there was going to know why my tumor was growing and nothing else wasn’t–that’s why I have an oncologist who went to medical school, fer crissakes. What a dumbass!

On Monday I returned to work and I was pretty fragile. I had anxiety all day, but after dinner I was feeling considerably better. I was looking forward to Tuesday. I woke up, got my affairs in order, suited up, and headed out for the office.  I felt I had purpose again. I wasn’t going to go away quietly. And, best of all, I was out of that poisonous loop. No noise.

Thing is, this noise wasn’t replaced by “happy happy joy joy” noise. It was replaced with my life. Not that it’s exciting, by any stretch of the imagination, but it wasn’t fucking cancer 24/7.

Cancer is the one thing that we can’t escape. It’s in our bodies or in our minds all of the time. If you’re a “survivor,” you don’t know that your safe. And if you have MBC, you never know what the next scan will show. We have a lot of ways to deal with that: we have our friends, we have blogs and Facebook groups that can give us information and/or support, and then we have the choice to turn it off. Each of these has a time and place, and the road isn’t always smooth by any means. But if we start to dig a hole for ourselves with only one choice, we’re going to die down there. Alone and miserable. And isn’t having cancer bad enough?